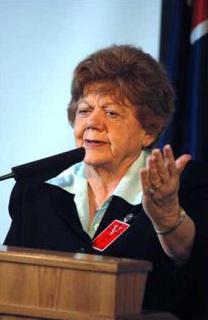 I grew up in the Ogden area.  Actually it was in a farming area west of Ogden in a place called Wilson.  It has now been incorporated along with Kanesville in to a community called West Haven.  Our farm included three different sections or about 120 acres.  My father was a principal of an elementary school, a junior high school and Ogden High School. When I was in high school, he became Superintendent of Ogden School District.  I never figured out whether my father farmed so he could be an educator or whether he was an educator so he could farm.  He used to call the farms his golf game and all five children played.  Actually, I look back on my childhood with very positive feelings, because we all learned to work, but we still had time for many neighborhood games and activities.  We did have the opportunity of traveling, as my father got his Ph.D. from the University of Southern California and we often spent time in the Los Angles area for six weeks during that period.  During my teen-age years, we also traveled in the northwest, including Yellowstone, as we had a large farm in Warden Washington.

My mother returned to teaching during the Second World War and continued most of the time until retirement.  She was also very active in community events and felt a real obligation to assist neighbors who were struggling financially.  We grew an acre and a half garden, much of which was given to neighbors.

I was elected student body president in the small elementary/junior high that I attended and was active in many activities and student government at Weber High School.

I attended Weber College my freshman year on a debate scholarship and then transferred to Brigham Young University for the remaining three years.  At BYU I was elected First Vice-President of the Student Body and first attendant to the homecoming queen.  I majored in Political Science and minored in History but I also got a degree in Secondary Education because my father was always ask, “Now what is it you are going to do with your degree in Political Science”?   I continued my education at Stanford University getting my Master’s Degree in Political Theory. I also received my Ph.D. from the University of Utah.

While my husband got his MBA from Harvard, I worked at Polaroid Corporation in Cambridge until our first son was born.  I then became a full time wife and mother. In our first eleven years of marriage we moved thirteen times, including moves to Pacific Grove California, Ogden, Boston, Newton, Detroit area, Salt Lake City, Albuquerque, Westminster and Arvada Colorado and finally back to Salt Lake City. In those eleven years, we also had seven children.

1999 –2000 President of the National Secretary of State Organization