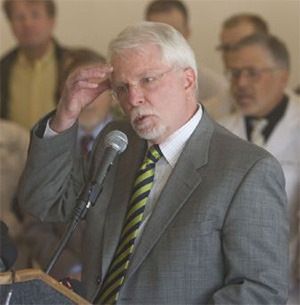 Though born in Wisconsin, I was raised and educated in Utah, becoming a rural family doctor in Ephraim.  Having contracted “Albert Schweitzer-itis,” I tried medical projects in Sumatra, Central Mexico, China, and Viet Nam, but found I had more power to do good at home.  I opened a free house trailer clinic in Moroni for migrant workers, which was the first in a series of personal experiments in medical care for the poor and uninsured.

Early in my career I became involved in organized medicine.  Among my early interests were making the profession and hospitals smoke-free, promoting selfless professionalism, controlling healthcare costs, and empowering rural health systems.  I was president of the Utah Medical Association, helped organize the national young physician group, and headed the AMA council on Long Range Planning.  I was named National Family Practice Doctor of the Year in 1993.

I retired from medical practice in 2010, but apparently still can’t stop doctoring friends, neighbors, and family, nor escape working toward system reform.  I volunteer as chairman of the Healthinsight Board and with Utah Citizens’ Counsel.