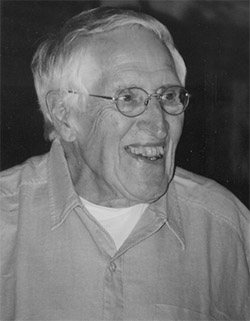 I moved to Utah in 1959 to join the Physics Department at the University of Utah where I remained as a faculty member and administrator until my retirement in 1998.  During this time I taught more than twenty different courses at all levels from freshman to advanced graduate.  I taught in the Physics Department, for the Honors Program and in the Liberal Education Program.  I was one of the originators of the highly successful “Super ITW” course, which, over five quarters, explored intellectual and scientific history of the past 2500 years.

I did research in condensed matter theory, held grants from the National Science Foundation totally more than a half million dollars over 20 years, supervised many Ph.D. and Masters Degree students, and am the author of some 50 scientific papers.  I am a Fellow of the American Physical Society.

I served on virtually every University Committee at one time or another, served a term as Department Chair in Physics, and six years as Dean of the Graduate School.

As a teacher I received a number of honors:

I have been involved in environmental groups for the last 49 years and am one of the founders of the Citizens’ Committee to Save Our Canyons, now in its 37th year.  I served on the Alta Planning and Zoning Commission and was a member of the Salt Lake City Winter Games Organizing Committee.  In 1990 I received the Pa Perry Award and in 2000 the Alexis Kelner Award both from the Wasatch Mountain Club, the 2005 Pfeifferhorn Award presented by a group of Utah environmental organizations and the Utah Nonprofit Organization’s Norma Matheson Outstanding Volunteer Award in 2006.

I am also a very active amateur musician, playing violin in various chamber music groups and am one of the founders of the Chamber Music Society of Salt Lake City.

I have skied, hiked, climbed mountains, run rivers, back packed and camped all over Utah since arriving here.

What I would like the UCC to accomplish:
There are so many ways that citizens can improve our community life in Utah, which is such a wonderful place to live.  Some of the areas where I have special interests and background are preservation of public lands and watershed, education, the abatement of global warming.  I have come to realize how effective committed long-term citizens’ groups can be.  This is one of the hallmarks of America and we must use this opportunity.