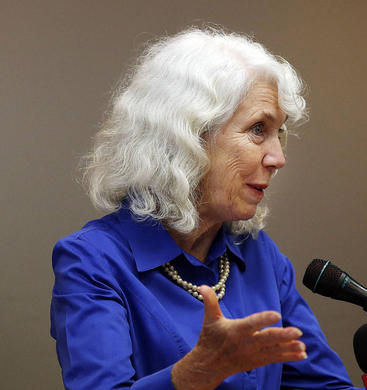 Seeing a need for drawing on the wisdom of senior Utahns who had been active in public policy, I was one of the founders of the Utah Citizens’ Counsel. It was a privilege to become a member after I retired in 2011 with almost 25 years as the Government Liaison and Director of the Peace & Justice Commission for the Utah Catholic Diocese.

My continuing volunteer activities include chairing the Gun Violence Prevention Center of Utah, acting as Treasurer of Utah Interfaith Power and Light, serving on the Advisory Board of the Healthy Environment Alliance (HEAL), as well as the boards of the Utah Workforce Services Advisory Council, Holy Cross Ministries, and the Tanner Center for Nonviolent Human Rights Advocacy.

My husband, our five daughters and I moved to Utah in 1974 when my he was transferred here with Union Pacific’s Communication Department. The League of Women Voters was my lifeline during those years as a full-time mother. I served as president of their board as well as the Utah Issues board as well as the chair of the Utah State Insurance Risk Pool from 1998 to 2001.

In 1982, when our administration talked of “limited” nuclear war I founded Woman Concerned About Nuclear War to raise the awareness of such a threat. I traveled to the Nevada test site for peaceful protests and to the Soviet Union with a congressional women’s delegation in 1987 and to the former Soviet nuclear test site in Kazachstan, USSR, with The International Physicians for the Prevention of Nuclear War  in 1990.

It is my hope that the UCC can play a role in engaging fellow citizens to consider creative policy solutions to human rights issues important to all segments of our community.