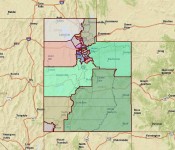 UCC Senate Plan A-1:  This state senate map is drawn to honor the following principles 1) political neutrality, with no intended benefit or detriment to any party or candidate; 2) respect for county and city boundaries to the extent possible; 3) combining population centers with common interests while accounting for geographic barriers and transportation corridors; and 4) proportional representation throughout the state so that no county or population center acquires a numerical advantage for more representation than its population justifies.

Specifically, the lines begin from the outer state boundaries and follow county boundaries toward the center until the required population number for a district (95,000) is reached.  The six largest counties, all with populations over 95,000, are necessarily divided.  The remaining counties are not required to be divided, but are instead combined with other smaller counties or with left-over population from the six largest counties to form separate districts.  For example, Box Elder, with a population of only 49,000, takes some of the population of the adjacent Cache County, which has nearly 113,000.  Brigham City, the main population center of Box Elder County, has more common interests with Cache County, including a connecting highway, than with Tooele County, which is separated by a lake and has no connecting highway.  Weber and Davis Counties are divided into the number of districts proportional to their populations.  Tooele County, the seventh most populous at nearly 60,000, is left undivided and combined with adjacent population centers in Salt Lake County, with which Tooele has much more in common than with distant Brigham City.  Salt Lake and Utah Counties are divided into districts proportional to their populations, with excess population added to adjacent smaller counties with common interests to form separate districts.  All of the districts are relatively compact, except the southeast corner of the state, which covers a larger area due to sparse and scattered population.  All the districts largely follow transportation corridors and combine contiguous areas with common commercial, recreational, environmental, and other interests. 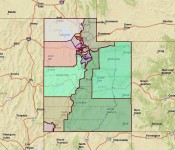 UCC State Senate Plan B:  This plan endeavors to follow the same principles of political neutrality, respect for county and city boundaries, combining population centers with common interests and transportation connections, and proportional statewide representation, as set forth for UCC Senate Plan A-1.  The same general method is applied:  begin at the state boundaries and draw district lines east and west toward the center of the state until the ideal district population number of 95,000 is reached.  The lines follow and preserve county boundaries to the extent possible, necessarily dividing the six counties with populations over 95,000, and combining the smaller counties with each other or with left-over population of adjacent larger counties with common interests.  The primary differences in this Plan B are that the Cache County-based district extends south into Summit County, the northeast district extends farther south, and the southeast district extends farther up into central Utah.  These variations allow different combinations of common interests related to commerce, recreation, and mining.